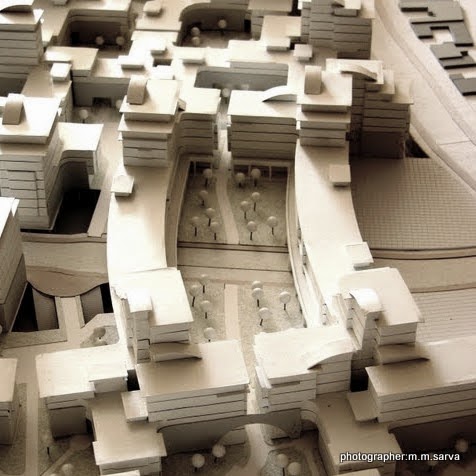 Situated in a 70,000.00 m2 site,Armaghan is a 126,000.00 m2 sculpture designed .1200 units constructed in one piece for 1200 low-income urban dwelling families. Armaghan is a small neighbourhood located in the city of bojnourd, Iran – and has been designed with the intention of reviving the feelings once awakened by the Persian architecture . Through texture, color, material, smell, scale and feel, this neighborhood-project has brought back to its inhabitants the forgotten sense of belonging they once had to their neighborhood.with courtyards and local shops in the main  square of he neighborhood.

Armaghan is one of the four citadel concept design by Sarva, free of walls, surrounded by a moat with  gates and bridges which control and grant access to the interior gardens connected to one another through a series of shady passages. Armaghan is a fort for pedestrians

The iron chariots(cars) are kept in the concourse level to keep the life of the inhabitants and the streetscape of the citadel in peace and free of visual, noise and air pollution, allowing the children to play and make memories.

Armaghan designed in 2005 ,under construction since 2008.

This site uses Akismet to reduce spam. Learn how your comment data is processed.